The Daedalus Ziggurat - The Real Story 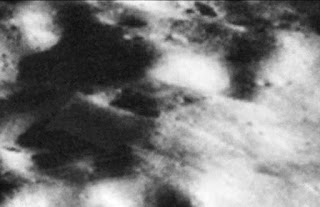 OK, Since Richard Hoagland decided to post the image of the Ziggurat near Daedalus that I sent him a week or so ago, a bunch of ... what's the right word, Haters? Morons? Have been attacking him over it and accusing him of fabricating it. I didn't really want to take any time from proofing my new book over this, but lies are lies and sometimes you can't let them stand. So here is my explanation and response, as posted to Facebook.

First of all, it is not Hoagland's Ziggurat, it's my Ziggurat. I'm the one who found it, I'm the one who named it, I'm the one who researched it, I'm the one who sent it to him, and it's going to be in my new book, Ancient Aliens on the Moon: http://astore.amazon.com/darkmissinet-20/detail/193548785X. so if you are going to accuse someone of fraud, it should be me not him. All Hoagy has done is improve on the image I sent him. Second, I do not know the source of the original enhancement, but it is said to be John Lear. Third, any competent photoshop user can easliy see that all of the features are there on the image from the LPI, but they have been contrast reduced to erase the visual cues that would make it stand out the way it does in the original. How NASA usually does this is to take an image, print it out, scan it again and then mess with the contast and then print it out (reduced) and scan it again. They probably reposted AS11-38-5564 after people started looking at it. Unfortunately, ever since we caught NASA red-handed in a bald faced lie with the internet archive in 2002, they pretty much don't let their pages be archived. That's what liars do. Liars also assume that others who disagree with them are liars, too, right Expat?

Next, if you enhance the Ziggurat area enough, you can bring out most of the features, including the ramps, the walls and the dome atop the temple. All you have to do is put the original side-by-side with an enhancement of the current 5564 and then stand back a few feet. If you have the ability to see 3D in your head it will jump right out at you, even though the "official" version has obviously been altered. But the best part is this isn't even the most interesting thing on the image. Can you find the tank? Can you find the gun emplacement? Can you find the flying saucer in a hanger recessed inside a mountain? Can you find the miles long retaining wall that terminates in some massive machine latched to a mountainside? They are all there, and more.

In closing, we may be able to find the original, unaltered version of 5564 in our analog archives, but even if we don't, I can promise you this; there is a lie here, and as usual, it's NASA's image, not our research.

PS - John Lear, or at least John Lear's Facebook page, has now declared he's not the source of the original Ziggurat image. The mystery deepens.