As you may have guessed, I have decided to end the Dark Mission Blog. This will be the last entry. It has been a great ride - Expat notwithstanding - but I feel it is time for me to move on and expand my horizons. I will still be blogging, but I will now be moving over to the Lightbringer Blog where I can comment on more than just the ongoing government conspiracy to cover-up the existence of extraterrestrial artifacts (LOL I sound like Fox Mulder at a bar after too many shots of Patron).

Please note that I will still be addressing the issues raised in Dark Mission, but since there won't be a Dark Mission II, I just felt it was time to move on. All of you guys are free to move over there, and I value the contributions of everybody, Hathor, Max, and even the big guy, Jim O. I suspect that over a beer or 2 we'd probably agree on more things than either of us would like to admit.

I'll be launching the Lightbringer Blog with a couple of career announcements on Monday, so everybody have a great New Year's celebration and I'll see you 2010, which promises to be an exciting year of change.

The Lightbringer Blog
Posted by Mike Bara at 5:09 AM No comments:

The Hoagy Chimes in on The Norway Spiral (Part Deux)

A few days ago, the interweb news nodes went nuts over a bizarre spiral formation which appeared in the skies over Norway. At first, I was impressed; it looked like for all the world like hyperdimensional weapon or even some kind of rail gun device going off. It didn’t take long for Richard Hoagland and lots of others in the UFO community to comment on it, and point out all of the reasons why it had to be aliens or some kind of Star Wars weapons test, and on the eve of Barack Hussein Obama’s (laughable) Nobel Peace Prize award no less! Adding to all the intrigue was the fact that this “cosmic pulse ray” seemed to be coming from the southwest, right in the direction of a HAARP-like device (called EISCAT) which was run by a consortium of European countries.

I decided to sit back and not comment on this for a number of reasons, but primarily because I figured there would be some kind of official explanation coming along quickly. At first, the Russians denied that it was a missile test that they had conducted, as would be customary if they got caught testing weapons over another country, but then they quickly reversed themselves and said, "yeah, it was ours." Of course, numerous UFO spokesman immediately cried foul, and claimed that we were seeing another Phoenix Lights type of cover-up, where the US military claimed that a massive boomerang shaped craft which flew slowly over that city in 1997 was actually flares from a weapons testing range over a hundred miles away.

However, in looking now at the video, I have to say that the claim of an errant Russian missile makes the most sense to me. Notice that there is a darker, bluish coil of exhaust behind the spiral; this implies to me that we are seeing the thrust cloud of a missile or rocket which has either been spun for stabilization\control purposes or is in fact spiraling out of control.

Note also how in some images the blue pulse is very tight, but then it rapidly diffuses until it is just a puffy plume of smoke or exhaust. This is exactly what I would expect to see if this is simply illuminated rocket exhaust.

Now, as to the tight, glowing spiral itself, again, this looks to me to be a rocket stage venting gas of some kind as it spins. The illumination is coming from the rocket exhaust at the back of the stage, creating the tight spiral effect. Also realizing that this is Norway and there are likely to be lots and lots of ice droplets in the upper atmosphere (if not the lower), the effect is even more dramatic. The ice droplets act like a million tiny mirrors, refracting the light and amplifying and emphasizing the glow. Now, if the fuel or whatever was being vented had ignited, we would certainly have seen a far more dramatic finish to the whole affair. As it is, we got a pretty dramatic “black hole” forming at the center of the spiral, but again, I think there is a perfectly logical explanation for this.

The mysterious “black hole” which appears in the center of the spiral as it dissipates also fits what I’d expect to see from a rocket stage burning out. Once the rocket has exhausted its fuel, the brilliant white spiral is going to lose its primary light source, and the result will logically be a dark spot which rapidly expands (from the distant viewers eye) and consumes the spiral.

So I don’t think this is a hyperdimensional weapons test or an alien device or at all. I think it’s a rocket that got out of control, was venting gas, and simply got caught on camera. And it all happened under some fairly unique weather conditions, which created the spiral effect.

Alternatively, this may very well have been a political statement on the part of the Russians. Barack Huessein Obama is (at best) the political reincarnation of the weak Jimmy Carter, and the Russians may have just been firing a shot across the bow to make a political point. But to decide it is a new weapons test without any real evidence is farther than I am willing to go. The Russians in fact do have some very sophisticated weaponry – ask Tom Bearden – but I doubt very seriously they were demonstrating it for all the world to see.

Having said that, it is plausible that this was in fact a staged event designed to get people buzzing about what it was. They could certainly have used a conventional rocket to create an event that appeared to be other-worldy, much like the recent Independence Day events in Moscow and elsewhere. But that plays into a wholly different kind of conspiracy – one that has a lot more to do with 2012 than it does with Obama’s absurd Nobel Prize.

Video of My Presentation @ the 2012 Alien Event

A new paper to be published in the latest edition of the Journal of Geophysical Research says that Mars once had a vast Northern ocean, exactly along the lines Richard and I described in our Mars Tidal Model paper in 2001.

The research, led by Wei Luo of Northern Illinois University, shows that Mars' valley networks are much more extensive than previously thought, and this strongly implies that they were carved by the flow of water from an ancient ocean in the Northern lowlands. Where our two theories differ of course is in not just the time frame, but the source of these valley networks. Luo, like all mainstream geologists, assumes that this vast ocean must have existed in Mars' ancient past, at least 2 billion years ago. Our model says it was much more recent than that, anywhere from 65 million to perhaps 2 million years ago.

We also differ in our models as to the source of this Northern ocean. In the MTM, the ocean was actually centered around 2 anti-podal locations on the Tharsis and Arabia bulges, with Olympus Mons towering over the largest of these two tidally locked water masses and with Vallis Marineris being carved from a tidal bore between these two enormous bodies of water. When the tidal lock was suddenly broken by the violent destruction of Planet V, the parent planet around which Mars once orbited, all of this water suddenly broke loose and flowed downhill into the Northern and Southern lowlands. The southern ocean was quickly covered up or evaporated under the bombardment of debris from the destroyed Planet V, while the outflows to the North scoured the Martian surface and deposited the remaining water in the new Northern lowlands, where it froze solid over the next several decades. In this model, the channels were carved very rapidly by the catastrophic flow of the tidal locked oceans into these lower regions.

Clearly, our model is correct, as earlier studies have failed to find a shoreline for this projected Northern ocean. This is because the mainstream scientists are looking for a shoreline from an ancient, long standing ocean in the North, while in fact the water flowed so quickly it never had time to form a cliff line along the shore before it froze. There is, conversly, ample evidence to support our idea for a tidal locked ocean on the Tharsis bulge; it is quite simply Olympus Mons itself, which has a 6 mile high cliff line all around it from the battering waves of the tidal ocean. 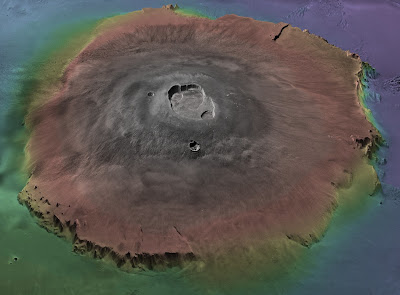 Maybe someday the mainstream guys will get out of their paradigm paralysis long enough to face the facts about Mars' geological history and the enormous implications it has for re-writing the history of the entire Solar System. Until then, we must be satisfied with once again being confirmed by their work, even if they don't understand what it means.
On the web: Daily Telegraph (UK)
Discover Magazine
Posted by Mike Bara at 5:47 AM 4 comments: