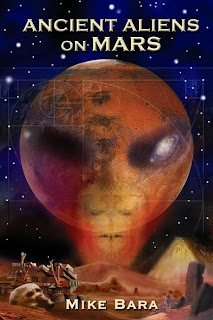 In recent years, as better and better images of the Face on Mars and other anomalies on the Red Planet have become increasingly recognized as artificial, NASA and NASA backed debunkers have retrenched and attempted to hide behind a non-existent limitation of human perception they call "pareidolia." According to the debunker crowd, pareidolia is a supposed human tendency to recognize facial patterns where none actually exist. This mythical, made-up tendency has no basis in fact, has never been written up or published in any scientific or medical journal, and has failed to meet even the most basic standards of a true medical or psychological disorder.
﻿

This does not stop it from being cited on a regular basis by the debunker crowd, who hail it as the be-all end-all answer to the question of whether the Face is artificial. In articles on the subject, they invariably show unprocessed or outright fabricated images of the Face -- like the infamous Catbox "enhancement" of the 1998 Mars Global Surveyor Face image. Never do they use the far more accurate and more directly overhead views, of which there are now many.
﻿

The reason for this is simply that in the debate about the Face and other anomalies at Cydonia, they haven't a leg to stand on. As my next book Ancient Aliens on Mars will reveal, the evidence that the Face and other pyramidal objects at Cydonia are artificial is overwhelming. Given this, in recent years it has now become de rigueur to redefine "pareidolia" to be a perceptual disorder whereby humans supposedly simply see patterns where none exist. This is akin to the man-made Global Warming alarmist crowd no longer using that term but instead  citing the generic "climate change" as the basis for their socialist environmental proposals. After 15 years of cooling and several studies that link global temperatures to solar activity (duh) their whole premise has been falsified. The same applies to "pareidolia."
In fact, the depth of the lie that is "pareidolia" can easily be found by simply tracing the word's origins. It is nothing but  a phony, pseudo-scientific term invented in 1994 by a UFO debunker named Steven Goldstein in the June 22nd, 1994 edition of Skeptical Inquirer magazine. This alone should tell you all you need to know about its credibility in the realm of ideas. Despite a complete lack of any valid scientific studies on the supposed “phenomenon,” it is still commonly cited by debunkers like James Oberg and Phil “Dr. Phil” Plait to give an academic air to their knee-jerk dismissal of the Cydonia anomalies. Some of these debunkers even resort to claiming that articles written about "pareidolia" by other debunkers are some sort of paper trail proving the phenomenon has a publishing pedigree. But the simple fact is no such human tendency exists.
At all.
﻿
There is however another very real human tendency that unlike the mythical “pareidolia,” is actually an extremely well-documented and medically established disorder— Prosopagnosia. Simply put, Prosopagnosia is a brain disorder that renders the poor souls that have it completely unable to recognize faces when they see them. According to some medical studies, as much as 2.5% of the human population may suffer from this disorder, and apparently a disproportionate number of those afflicted have found jobs in the NASA planetary science community.
So the next time some NASA loving troll tries to tell you the Face on Mars is just all in your head, ask him to show you one medical paper -- even one -- which has studied the supposed phenomena of "pareidolia." Then hit them back with Prosopagnosia.
Within the next sentence or two I guarantee you they will call you a "conspiracy theorist" or cite their academic credentials.
Notes:
http://www.wordspy.com/words/pareidolia.asp


They've also attempted to claim that 3 obscure papers they mined on the internet use the word “pareidolia,” in their abstracts, and that this somehow proves me wrong, and that “pareidolia.” is a real, established medical condition. In a comment authored by "James Concannon" (who I think is actually the Village Idiot working under a pseudonym, a practice he has admitted to) they claim that I said that "no scientific or medical literature exists authenticating pareidolia."

First of all, "James Concannon," if he even exists, has sexually harassed numerous female Facebook friends of mine in the last several years, sending them harassing message after harassing message. At least 5 women had to block him to get it to stop. This is par for the course for both the Village Idiot and the distinguished Dr. Robbins, both of whom have proven time and again what complete creeps they are by pretending to be other people. They do this to keep people from realizing how mentally disordered they are, and to make their numbers look far greater than they actually are.

But I digress. What I said above about “pareidolia” is crystal clear. "This mythical, made-up tendency has no basis in fact, has never been written up or published in any scientific or medical journal, and has failed to meet even the most basic standards of a true medical or psychological disorder."

The 3 papers cited, which I was aware of when I wrote this post, do nothing to make me change or retract this claim. None of them is a medical study that establishes that there is an actual medical condition which causes people to see things that aren't there or don't exist. All they do is make reference to the word.

The first paper, published in 2009, assumes that “pareidolia” exists and specifically links it to facial recognition only. In reality, the paper is not about “pareidolia" at all, but only measures the speed of cognitive responses to visual stimuli, and nothing more. If the study had been done prior to Goldstein's 1994 reference and the debunkers community repeated use of it with regards to the Face on Mars, the word probably wouldn't even appear in the abstract. In any event, the paper is not a study of “pareidolia,” but merely the speed of brain function. The paper itself only uses the word "pareidolia" twice, and CANNOT EVEN CITE A SINGLE MEDICAL/SCIENTIFIC STUDY pointing to its existence.

The third paper, published in 2009 in Brazil is available only in abstract form and like the other two, assumes that “pareidolia” exists, but once again does not cite even  a single study confirming that.

It's obvious that the Village Idiot simply went to the PubMed.gov website and searched for the term “pareidolia.” All he could find were a pathetic 3 results, none of which is a study of the actual alleged "phenomenon." There is a 4th result, but the paper is in Spanish and the abstract is so off the wall that they must have decided not to cite for fear of embarrassment.

What this reinforces is that as I have asserted, there is no medically established disorder called “pareidolia.” If there were, there would be dozens of studies pointing to it and identifying its origins, causes, and treatment. Legitimate medical/psychological conditions like Prosopagnosia have such medical pedigrees. In fact, Prosopagnosia turns up an impressive 686 papers and studies from the same web site. The fact that all of the “pareidolia”papers were written after Steven Goldstein coined (or re-coined) the phrase in 1994 indicates they wouldn't even be using the term if it hadn't found its way into the debunkers vernacular in the first place.

So all they have done in reality is to further prove my original point: The supposed phenomenon of “pareidolia” is an Urban Myth perpetrated if not created by the debunkers, and nothing more.