My Statement on "Unearthing Nazca" and the Supposed "Alien" Mummy 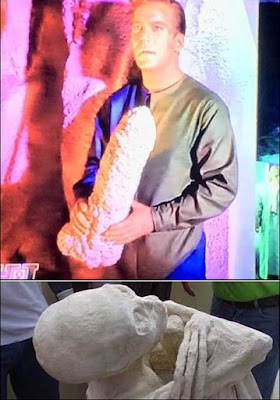 Here, in no particular order, are my thoughts on the alleged "alien mummy" supposedly found in Nazca, Peru which is featured in the Gaia.com video "Unearthing Nazca," which can be found here.

1. It's fake AF.
2. It looks like it was made out of paper mache'. I've seen rocks on the original Star Trek that looked more realistic.
3. Jaime Mausan - Need I say more than "The Roswell Slides"? We've been down this road before.
4. Several of the "scientists" involved in this scam have very questionable backgrounds and credentials.
5. As far as we know, there is no confirmed trail of evidence as to where it was found.
6. One of the producers involved in this mini-film is personally known to me. She is not very smart, emotionally unstable and not an honorable person.
7. Jay Weidner - I know Jay Weidner. Jay Weidner is a friend of mine. Or at least he was before I posted this. I like Jay Weidner. But if jumping to conclusions was an Olympic sport, Jay Weidner would have more gold medals than Michael Phelps.
8. Gaia - Gaia has some good programming, like George Noory's show. But they also have more than their fair share of con-artists and flim-flam men on the network. Caveat emptor.

In the end, this appears to be just another attempt to generate clicks and drive subscriptions, which I have no problem with. But in my opinion as any kind of "proof" of aliens it will amount to nothing. We have been scammed again.
Posted by Mike Bara at 9:45 AM No comments: