How Did the Dutch Government End Up With a Fake Moon Rock? 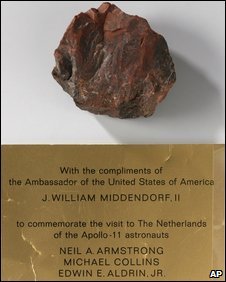 Maybe JimO can put his investigative prowess to some use here.
Fake Dutch 'moon rock' revealed
Posted by Mike Bara at 8:55 AM 5 comments: Interesting stuff. Thanks to David McCabe for pointing me to it.
Link: Full Resolution Version
Link: Wider Angle
Posted by Mike Bara at 6:12 AM 7 comments:

In his book "Dark matter, missing planets and new comets," the late Dr. Tom Van Flandern postulated, based on his Exploded Planet Hypothesis (EPH), that virtually all asteroids would be found to have orbiting satellites. This was based on his initial observation that chunks of debris from tests of Russian anti-satellite weapons had a tendency to orbit each other, smaller chunks assuming orbit around larger ones. This observation has now been confirmed numerous times, with the latest being asteroid 1994 cc. Radar observations at the Arecibo Observatory in Puerto Rico have confirmed that 1994 cc is indeed 3 objects, not one, as is assumed by the conventional models.
This is simply more evidence in support of Van Flandern's theory, which looks stronger by the day. Since very few Near Earth Objects or other asteroids have been observed, and a sizable percentage have now been found to have satellites, it follows that a very high percentage of asteroids have satellites or moons, and that strongly implies that his EPH is correct.

The Monolith of Mars?

This one sure does look the part (it even seems to have the correct 1:4:9 proportions), despite the fact that it appears to be white and not black. Stanley Kubrick and Arthur C. Clarke are smiling somewhere and having a laugh...
Granted, this does come from the Sun (not that there's anything wrong with that -- I do so love Page 3) and there is no image number, but it sure looks like a legit MRO image.
Full Story: Mars monument "proof of life"
Thanks to Joe for the link.
Posted by Mike Bara at 9:09 AM 9 comments: